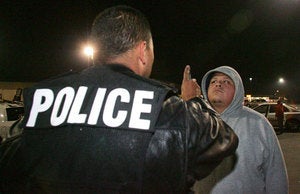 I'm always asked whether someone should (or more commonly should have) take field sobriety tests when asked.  My common answer is no!  Now there is new case law in Washington, specifically State v. Mecham, wherein the court held that although the tests are voluntary the "refusal" to participate in them can be used to show a consciousness of guilt!  Really!  If you decline a voluntary test a prosecutor can say you are guilty?  Yup, according to our Washington State Court of Appeals.

This is just one step closer to removing all rights from anyone accused of DUI.  Our Washington State Court of Appeals (Division I) is essentially saying, hey if you are suspected of a DUI, you might as well be suspected of terrorism because you are no longer afforded any rights.  The courts are even trying to take away the right to speak with an attorney if you are accused of DUI (See recent Hawaii decision).  No one condones DUI, but this is utterly ridiculous!!

In response, what I would recommend is that you make sure and point out the reason you are declining the tests, some examples would be: (1) a prior or current injury, (2) I was advised to do so by an attorney, (3) if you aren't going to record them I don't want to take them because you could say I "failed" when I didn't, (4) I've been advised they are impossible to pass, they are subjective, and I don't believe I am guilty but I am declining these tests.

It is truly unbelievable that the Court of Appeals would take such an inherently trite position concerning refusal evidence.  I mean think about it, a cop pulls you over and says "hey, you want to take these voluntary tests."  You hear voluntary and think, well if I don't have to I won't and then a prosecutor can tell a potential jury that exercise of your refusal is a consciousness of guilty.  What a contradiction!!!  The cop never told you that it would be used against you if you didn't take them, only that it was voluntary.  How ridiculous.  So again, DO NOT take these tests, but always tell the cop, "I don't believe I am guilty of anything, but I am simply not going to perform these subjective tests."

Now, I have heard of one instance wherein a friend of mine told me he took them (against my advice) and was let go.  That result is an anomaly in my experience.  If you have had anything to drink, or smoked marijuana recently, I would advise you skip these tests.  Why?  Well, the way in which these tests are administered are much different than how they were "standardized."  What I mean by that is the National Highway Traffic Safety Administration (NHTSA) conducted three tests (Horizontal Gaze Nystagmus, One Leg Stand and Walk and Turn) to determine the accuracy of predicting a BAC result based upon the clues observed and reached conclusions with percentages related to accuracy (the officers administered these tests on people who had been drinking, observed the clues, guessed what their BAC would be ultimately and whether they would have arrested the subject - of course these were volunteers at the study locations).  After calculating their results they standardized these three tests, meaning that if all three are administered correctly and the individual exhibits a number of clues, there is a high percentage they would submit a BAC reading above the legal limit (0.08).

Seem legit?  Well no...why you say?  Take for example the subjects who participated in this "standardization."  They were a group of family and friends and co-workers who were dosed with specific amounts of alcohol and asked to take these tests.  The tests were conducted without fear of arrest, so you can take out the anxiousness and nervousness, who were of relatively good health and average age.  So officers did not conduct these on older individuals or those suffering from any physical limitations.  Troopers often testify when they were conducting tests on individuals with physical limitations (i.e., knee injury, etc.), "oh I took into consideration their limitations."  Really, how?  Were they ever trained how to "take the limitation into consideration?"  NO! Also, consider that the standardization took place in a controlled environment, meaning not on the side of the road, in the cold or rain with cars whizzing by at 70 mph.  How could these tests accurately represent a standardized result?  Simple, they can't and don't.

So when a trooper records clues from these tests, those clues themselves are skewed because the conditions of administration are vastly different than how they were trained. Keep in mind that this is how troopers are currently trained to administer these tests, typically in a high school gym, in controlled temperatures, with no distractions, administered on individuals who volunteered and are not subject to arrest. How standardized is that?  Ha!  Why would anyone want to participate in these feats of balance given the training?  My advice, simply politely decline, inform the trooper you are not impaired but that you have been advised not to participate in them.  Then, if arrested, ask to speak with an attorney at the earliest opportunity.

Marijuana users:Keep in mind that the field sobriety or roadside tests were not meant to detect impairment for THC but alcohol, nevertheless law enforcement will still implement these tests if they suspect you have smoked.  Our advice, just don't do them, politely decline and say you have been advised by an attorney not to take them because they are not accurate and are unfair.