Is it possible to beat a first DUI Charge with an experienced DUI Attorney?

Yes! Absolutely! Whether it is a DUI dismissal, an amendment to Reckless Driving or Negligent Driving, we fight your DUI to get you the best results possible! There is a reason we have 5 Star DUI Reviews when you search "Best DUI Lawyer Reviews"- it is because we strive to fully satisfy every client and do our absolute best to garner the best DUI results. We make it a point to stay up to date on recent DUI case law so that we can best defend your case. Whether it is a Blood DUI or a Breath Test DUI or Marijuana DUI, we know how to defend DUIs in Washington State!

How do you know Who is the Best Seattle DUI Attorney?

Choosing a DUI attorney is tough, keep this in mind: Radio Ads, 800 Numbers and Billboards are big firms covering big salaries for numerous employees, they are no indication of results. Nate Webb has been repeatedly recognized as a DUI "Top Attorney" by Seattle Met Magazine, perennially rated as a "Superb DUI Attorney" (perfect 10.0/10.0) by Avvo.com and commended by his peers in Super Lawyers Magazine. This is just one of many reasons the Webb Law Firm is listed in search engines as the Best Seattle DUI Attorneys and Best Kirkland DUI Lawyers. Nate Webb has personally represented over 1,000 DUI clients represented and conducted over 100 DUI jury trials, the Webb Law Firm has proven DUI results.

What should I look for when searching for a DUI attorney?

What is your DUI success rate?

We have a 96% success rate with DUIs, that means that 96% of the people we represent have had their DUIs dismissed, found not guilty after a jury trial, or reduced to a lesser offense.* For over a 16 years, Seattle DUI Attorney, Nate Webb, has been delivering excellent Washington State DUI Defense and DUI Results. Our firm consists of some of the Best Seattle DUI lawyers in the State of Washington.

Who has the Best DUI Lawyer reviews?

With over 1000 DUI clients since 2004, we have tons of 5 star DUI reviews across the internet (5 Star Google DUI Reviews, Perfect 10 out of 10 on Avvo.com, 5 Star Yelp DUI Reviews, etc.). We strive to make every client completely satisfied with our services. 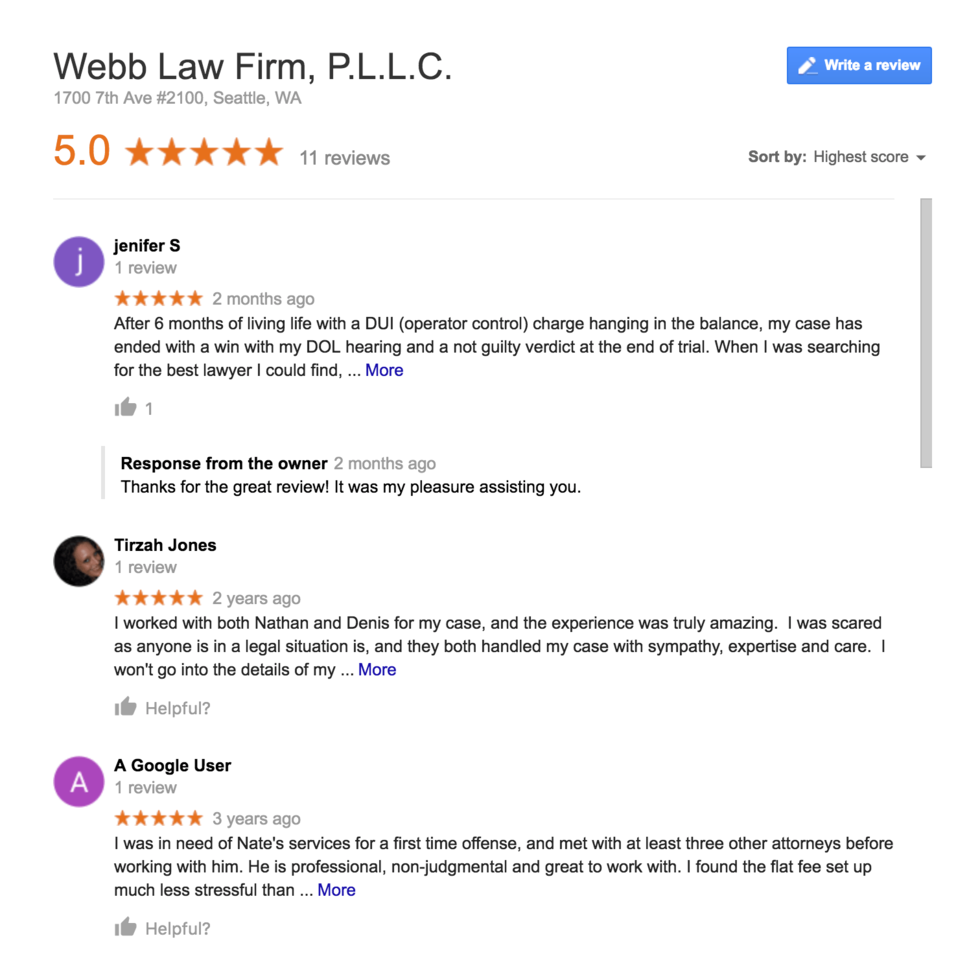 Who is the Best Seattle DUI Lawyer?

Nate Webb has been repeatedly recognized as a Top Attorney for DUI Law by Seattle Met Magazine, selected as a Super Lawyer Rising Star four times and always rated a perfect 10 out of 10 Superb Attorney by Avvo.com. He has successfully defended over 1,000 DUI cases.

Who are the Best Kirkland DUI Attorneys?

When searching for a DUI Lawyer in Kirkland, whether it is Yelp, Google, Facebook, AVVO or others, we have only 5 star reviews from our DUI clients and have proven ourselves as excellent and respected Kirkland DUI lawyers. Our DUI Defense firm applies numerous creative defenses to each client's case which has produced exceptional results and established our reputation as some of Seattle's Best DUI Attorneys! Call now for your free consultation (425) 522-4200 with one of Washington's Best DUI Lawyers.

We know how to get the job done!

Consequences to consider when searching for the Best Seattle DUI attorney after a Seattle DUI Arrest:

We know you have a lot of DUI arrest questions, so contact us right away and we can answer them in great detail. In order to avoid consequences of a DUI arrest, you need to contact the Best DUI Attorneys in Seattle at the Webb Law Firm. We are your elite Seattle DUI Lawyers and Mr. Webb is recognized as one of Seattle's Best DUI Attorneys, so choose wisely.

As one of the Top DUI Attorneys in the state, Mr. Webb's credentials include: